Home / Extraordinary Jane / How Sisterhood Is Our Greatest Strength: Show Up for Her 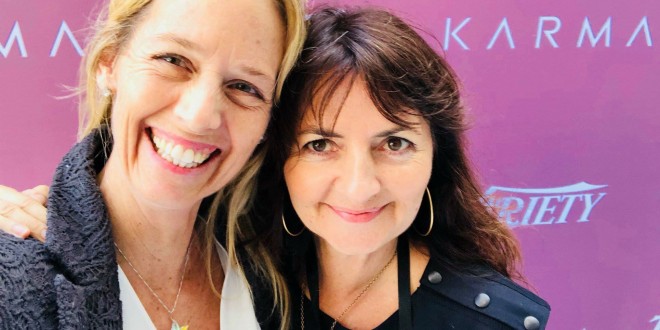 How Sisterhood Is Our Greatest Strength: Show Up for Her

We’re standing in a room in the middle of a circle surrounded by some of the most powerful women in Hollywood: directors, presidents, producers, recognized leaders in the industry. How did we get here? We’re hearing women say that they’ve always been at this alone, sometimes the only woman in the room, or on set. They have felt lonely, isolated and frustrated.

We’re mindful that as we hold this space as leaders we ourselves are feeling vulnerable as we step into an industry where vulnerability and asking for help is seen as a weakness and the more power one has, the greater the risk. Yet we’re keenly aware that collective sisterhood is both our greatest strength and also, at times, our greatest challenge.

Poet Terry Tempest Williams eloquently compares feminine leadership and sisterhood to that of the Canadian Geese in flight. The lead goose is surrounded by her wing-geese and they are supported by their flock, honking to encourage the journey. Once the lead goose is tired, she and her wing-geese move towards the back of the flock and another goose takes the lead.  They travel for thousands of miles to reach their destination through the support and engagement of every single goose. Just as we have been moving through the patriarchy for thousands of years, we are coming through the storm and landing on uncharted territory. The geese remind us that every single one of us plays a vital role in this movement for gender equity and its the collective force that will see us through.

The patriarchal system has done a heck of a job isolating women from one another. Media for years has presented a picture of women backstabbing other women, and has created a storyline that we are competitive against one another, in particular for the love or attention from a male interest. This storyline has also perpetuated the belief that there are only a few spots for us “at the top,” and therefore we need to do everything in our power to keep other women out of those spots. This storyline of female competition and lack of support for one another has been a huge disservice to us.

We have both been in situations where there has been a scarcity mentality amongst our female colleagues, and while we were all working toward the same goals, the competitive and scarcity mindset that has been embedded in our culture, and therefore ourselves, sabotaged our efforts. We often say, “the patriarchy lives in all of us,” even those of us who are working on the frontlines toward gender equality and parity.

Elisa and I met in 2010 at Maria Shriver’s Women’s Conference, and had bonded immediately due to our shared mission to amplify women’s voices. Elisa had recently launched See Jane Do, a multi-media platform to showcase everyday women doing extraordinary things. I recognized that she had an extraordinary ability to see connections amongst people and organizations. She was a community builder and coalition-builder. For years, I worked alone. As a coach and consultant, I worked one-on-one with women to help them find their voice and build their leadership platform through writing, public speaking and entrepreneurship. I didn’t know when I met Elisa how much my approach to helping women would change.

Two years ago, Tabby and I joined the organization, Take The Lead, as leadership ambassadors with the focus of creating gender parity in leadership in all sectors by 2025. We both agreed that moving the needle at a quicker pace required working within the industry that had the largest influence on our culture and representation. We went to the belly of the beast, Media & Entertainment. We thought that if we can advance more women behind-the-camera and in decision-making positions, creating media that accurately represents women and girls, this would have an effect on how women and girls see themselves and each other, and how men and boys see us. Media and entertainment is our biggest export, and shapes global culture. We saw this, in addition to policy change, as the panacea toward creating gender equity.

Have you heard of “The Scully Effect”? As GenXers we grew up watching the X-Files featuring Dana Scully, FBI special agent and medical doctor with a background in hard science. In a study conducted by 21st Century Fox, the Geena Davis Institute on Gender in Media, and J. Walter Thompson Intelligence, over 2,000 female participants were surveyed to accurately test the “Scully Effect.” For 63% of those women surveyed, the women said that Dana Scully served as their role model and was the character who influenced their awareness of the importance of STEM work. The women said they decided to pursue careers in science, medicine and law enforcement after watching the show.

This is just one example of how media shapes how we see ourselves and our potential. Given that over 90 percent of the funded Hollywood storytellers are men, we’re operating through a lens that neglects to include over half of our population.

There’s a storyline that there’s not a plentiful pipeline of talented female directors, writers, and producers in Hollywood. This is a myth. We are co-creating a coalition that brings to light these women who have been doing the work for years, and yet, are often invisible in mainstream media.

Serving as trailblazers to the Take The Lead program, last year we launched and co-directed, 50 Women Can Change the World in Media & Entertainment, a four-month gender parity initiative where it was our objective to collectively grow the sisterhood among women in the media and entertainment industry, forming a cohort that can work together over the long term to change the narrative worldwide. Just days before our soft launch event, Ronan Farrow published his piece in the New Yorker about Harvey Weinstein. Talk about walking into the fire and stepping into the rubble.

By the end of the four months together, these 50 diverse women, from a cross-section of the industry, including 40% women of color, from buzz-worthy newcomers to seasoned professionals, had bonded. As they bonded, they rose, and they rose together, creating a strong infrastructure that could buttress their career in a toxic system. We saw this help reduce burnout, provide a stepping stone to each woman’s next steps and support each other to create new possibilities within a system that, up until this point, had not served them.

We saw that the most potent elixir to elevate these women in their careers was sisterhood. All of the leadership tools we taught the 50 women cohort were important and necessary. But what we heard over and over again from the women was that sisterhood is what catalyzed them into the next place in their career.

When we come together in sisterhood, we mirror back to one another our innate female power, and we start to remember who we are. This ignites our creative power and we reconnect with ourselves in a whole new way.

With this said, coming together in sisterhood is not without its challenges. We are a diverse community with different life experiences. We have engaged in important conversations around race, class, gender identity and privilege. Everyone has their own opinion about things and everyone wants to move certain things forward. But finding the commonalities in this group has been powerful and has served as a foundation in our collective work together to achieve gender parity in the media and entertainment industry.

Last weekend, See Jane Do and our sisters at FilmRev, brought together over 100 women in Hollywood who are leading the way toward gender parity and inclusivity in media and entertainment. We gathered in West Los Angeles for a day-long retreat to deepen our lines of trust and communication, educate each other on what one another is doing, expand our collaborations, and ramp up for our 2019 collective action plan, building our coalition and expanding the blueprint for change as we enter the next phase of this movement.

Our work toward gender parity and inclusivity requires every single one of us to step up and out of our isolation, and speak our truth.

In less than three days we will have yet another opportunity to express the power of our voice at the polls and bring with us the collective force of sisterhood. The power paradigm in our current system leads us to believe that one is either the oppressed or the oppressor. We have the power to break free of this belief and move towards a more just and balanced society, one that treats all humans with respect and dignity. We have the influence to shape the world we want to see, be that through media and entertainment, politics or how you choose to show up in your everyday life. Show up for her. Show up for yourself.

Tabby Biddle and Elisa Parker are the co-creators and co-directors of 50 Women Can Change the World in Media & Entertainment, and the co-founders and lead facilitators of 100 Women Change Hollywood. Learn more at tabbybiddle.com and See Jane Do.

This essay was featured in the Nov. 4th edition of The Sunday Paper, Maria Shriver’s free weekly newsletter for people with passion and purpose. To get inspiring and informative content like this piece delivered straight to your inbox each Sunday morning, click here to subscribe.