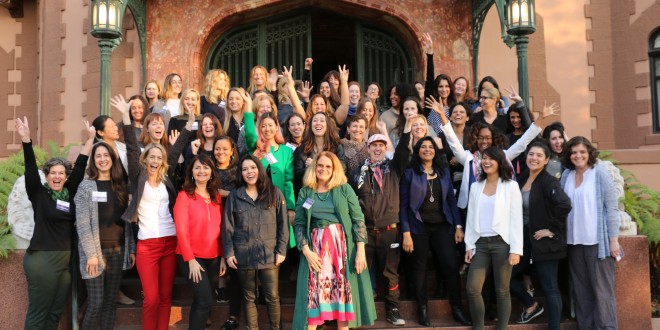 (Los Angeles, CA) – After a big week at the Golden Globes and women taking a stand to say #TimesUp, Take The Lead, a cutting-edge nonprofit organization recognized as gender parity experts, is transforming the #MeToo movement into women’s #PowerTOLead. With a comprehensive program that delivers results, Take The Lead announces The 50 Women Can Change The World in Media and Entertainment Cohort 2018.

What would the world look like if women and men shared equal power? #50WomenCan Project Directors, Tabby Biddle and Elisa Parker plan to find out by organizing and leading a team of 50 accomplished women in the media and entertainment industry to close the gender leadership gap and co-create a blueprint for systemic change.

The 50 Women Can Change the World in Media & Entertainment cohort represents a diverse cross-section of women in the industry, many who were nominated by their peers and are recognized leaders for their work as advocates for women’s leadership and gender equity.

“These are the women who have made it their life’s work to advance women and girls,” says Elisa Parker, #50WomenCan Project Director and Leadership Ambassador.  “We are honored and thrilled to work with such an extraordinary group of trailblazers in the industry.”

The cohort represents industry executives, award-winning producers, writers, directors, agents, film and media educators, journalists, and crew who will collaborate on finding real-world solutions. The cohort includes women like Maria Giese, who in 2015 instigated the biggest industry-wide federal investigation around discrimination against women directors in Hollywood history. She is now a subject in several feature-length documentaries in production and has been signed by the Boston literary agency Kneerim & Williams to write a book, “Troublemaker.” Kamala Lopez, actress, filmmaker, activist and President of Heroica Films, who has launched the movement and film Equal Means Equal, to educate Americans about the importance of equal rights under federal law for women, and executives such as Winnie Kemp, SVP of television development at Super Deluxe/Turner Broadcasting, who was among Adweek’s 2017 list of female disruptors in media.

The #50WomenCan program also includes social change activists such as award-winning producer, writer, and director, Aisling Chin-Yee who co-created, alongside actor Mia Kirshner, #AfterMeToo, a symposium, series and report that analyzes the issue of sexual misconduct in the entertainment industry, Amie Williams who founded her own film/video production company, Global Girl Media Productions and the non-profit, GlobalGirl Media, which develops the voice and media literacy of young women, and Ana Flores, founder and CEO of #WeAllGrow Latina Network, the first and largest community of Latina digital influencers.

Part leadership development, part think tank, part movement building, the 50 Women Can Change The World in Media & Entertainment program is made up of a diverse community of leaders who will support each other and all allies of gender parity through this historic paradigm shift.  During this four-month, game-changing program, participants will build relationships, learn new ways to access their power and utilize practical tools to advance their careers and create systemic change.  The initiative is based on Take The Lead’s core curriculum, the “9 Leadership Power Tools to Advance Your Career” training program, that teaches women how to lead themselves, their careers, their organizations, and their industries with a new definition of power, shifting from an outdated, oppressive “Power Over” to an expansive, positive and innovative “Power To.”

The program includes alliances with networks, studios, agencies, like-minded initiatives and organizations such as WomenConnect4Good, NeueHouse Hollywood and Mount Saint Mary’s University.  Mount Saint Mary’s University, Los Angeles’ only women’s university and home to the Geena Davis Institute on Gender in Media, will conduct a year-long study to assess the impact and efficacy of the program led by the University’s Center for the Advancement of Women. Emerald Archer, PhD, director of the Center, will spearhead the study and engage faculty and student researchers in the University’s film, media and social justice program, and in the MFA in Film, Television and Photography.

Tabby Biddle, #50WomenCan Project Director and Take The Lead Leadership Ambassador, states “By elevating women’s voices in media and entertainment, the scope of change will go beyond the women in the program. It will shape the culture we wish to see.  A more nuanced approach to women’s stories from diverse backgrounds will open the door to deeper understanding and a quickened pace to equality for all.” Parker adds, “This is not about “breaking in” or learning new ways to cope with systemic flaws, though it is important to understand the existing systems in order to change them. It’s about building something new based on the experience of a diverse group of women and changing the system.”

The inaugural 50 Women Can Change The World in Media & Entertainment:

Aisling Chin-Yee, Producer/Director/Co-Creator After Me Too Symposium, Fluent Films

About Take The Lead

TAKE THE LEAD prepares, develops, inspires and propels women to take their fair and equal share of leadership positions across all sectors by 2025.

Mount Saint Mary’s is the only women’s university in Los Angeles and one of the most diverse in the nation. The University is known nationally for its research on gender equity, its innovative health and science programs, and its commitment to community service. As a leading liberal arts institution, Mount Saint Mary’s provides year-round, flexible and online programs at the undergraduate and graduate level. Weekend, evening and graduate programs are offered to both women and men. Mount alums are engaged, active, global citizens who use their knowledge and skills to better themselves, their communities and the world. msmu.edu

NeueHouse Hollywood is a private workspace and cultural center for creative entrepreneurs in film, design, fashion, branding, architecture and the arts. Originally the home of CBS, this Modernist landmark opened in 1938 as the first-ever establishment purpose-built for broadcasting and today offers members dedicated work spaces, personalized services and an opportunity to be a part of a meaningful dialogue with leading artists and thinkers. We are thrilled to be partnering with NeueHouse to offer a series of #50WomenCan panels, screenings and salons focused on closing the gender leadership gap in media & entertainment. NeueHouse Hollywood supports female entrepreneurs through cultural programming and is aiming for their membership to be 60 percent women. neuehouse.com

Founded by O’Reilly, Women Connect4Good supports and connects women to empower and lift up all women to break through barriers that prevent them from achieving sustainable, fulfilling lives and claim their power to change the world. Women Connect4Good.

For additional information on the 50 Women Can Change The World in Media & Entertainment, contact Elisa Parker at elisa@seejanedo.com