Home / Events / Nevada County “A Day Without A Woman”

Nevada County “A Day Without A Woman” 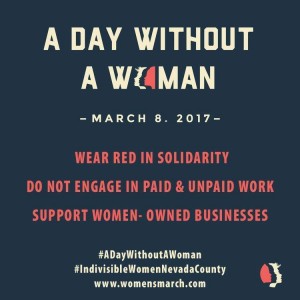 Women and their allies throughout Northern California are expected to congregate in Grass Valley and Nevada City, home of the 19th Amendment, this Wednesday, March 8, 2017 for equity, justice and the human rights of women, through, “A Day Without A Woman” call to action and celebration of “International Women’s Day.” A full schedule of events is planned, highlighting the power of women in our local economy, recognizing female-owned businesses in rural counties, and stepping up for the rights of all.
Rising up in rural America, participants are invited to wear red in solidarity to women, avoid spending money (with the exception of women-owned and minority-owned small businesses) and engage in activities that inspire and educate based on the unity principles of the Women’s March
Event organizers’ Indivisible Women Nevada County (IWNC) stand on the tradition of activism for equality established by such pioneering women as Nevada City luminary Ellen Clark Sargent, a leader in the women’s suffrage movement. It was at her Broad St. home in 1878 where, with her husband, Senator Aaron A. Sargent, the 29 words constituting our 19th Amendment were penned. IWNC also promises to celebrate sisterhood and honor the day in our own unique way.“We recognize that every woman needs to participate in their own way. We were amazed at the number of female led businesses who wanted to step into action and are working with schools, non-profits and individuals who are challenged by this call to action. Nevada County is uniquely qualified to offer ways for men and women to plug into this day unified. We will not let our passions divide us!” Says Elisa Parker
The Day Without a Woman demonstration will kick off at Robinson Plaza in Nevada City from 10am-12:30pm featuring a range of activists, spoken word artists and musicians including disabilities activist, Molly Hale co-founder of Ability Production.  Hale is also a 4th Degree Black Belt and Sensei in the martial art of Aikido and a 2002 Olympic Torch Bearer.  Later in the afternoon the group,  RAFTT (Radical Art For These Times) is hosting an “art in” featuring an informal street party/music session/crafting circle and potluck picnic.  Other speakers include, Bonnie Stewart, Margo Stebbing, Reinette Senum, Tracie Stafford, Valentina Masterz, Shelly Covert, Laura Belk, Sheila Cameron and Elisa Parker.
Osborn Woods Gallery at The Miners Foundry will be supporting Women of Worth, a local organization dedicated to helping victims of domestic violence  with a silent auction from noon-7:00 PM. The Gallery is also pleased to host a casual meet-and-greet, from 12:30 PM-2:00 PM, with local artist and Woman’s March Sacramento organizer Sheila Cameron and women’s rights advocate and Ovation PR Vice President Tracie Stafford. Stafford has been a Women’s rights advocate for over 10 years working with organizations such as the U.S. Department of Justice, Office on Violence Against Women, The National Institute on the Prosecution of Domestic Violence and other organizations focused on justice and equality for women. She is a Governor Appointee, Elected Assembly District Delegate, Candidate for Elk Grove Mayor and the Emcee for the Women’s March on Sacramento.
“The energy of the Women’s March in Sacramento showed me how powerful women gathering can be. We came together that day like never before and it is that spirit I hope we can continue. The unity principles of the Women’s March speak to so many important issues. For me this action is about showing up powerfully in our community and looking at our complicated history in order to move forward effectively,” says Sheila Cameron Artist and Woman’s March Sacramento organizer.
Hundreds of female business owners and non-profit leaders in the area are supporting “A Day Without A Woman” either by closing doors or staging special programs.  Briar Patch Co-Op staff will rise up in solidarity and are identifying long-term initiatives to increase their support for women in our community.  Local merchants such as Neva Co. and Cult of Gemini are providing free services that inspire passion into action, Yoga studios including, Full Life Yoga Studio and Warmth are offering free Yoga classes and numerous businesses are offering discounts to patrons who wear red in addition to donating part of their proceeds to women supported organizations.  For a full list of participating businesses go to www.indivisiblewomen.org.
Three prominent Nevada County establishments choosing to stay shuttered in solidarity are Valentina’s, owned by Valentina Masterz and husband Ron, Kitkitdizzi, owned by Carrie Hawthorne and Kira Westly and Jacobsen Chiropractic.  “We are joining with millions of women across the globe to take a stand,” says Masterz.  “I want to unite in solidarity where regardless of our political views, we can come together with the goal of nurturing our planet, our country, our people, our communities and our families.”
Local schools are also organizing around this historic event.  Where women make up 94% of their staff, Nevada City School of the Arts director, Holly Pettitt says, “together, we’ve decided that coming to work and both celebrating and honoring the significant role we play in the education and the lives of students is an equally important acknowledgement of the importance of women.  On Wednesday we will arrive on campus ready to celebrate who we are and what we value, beginning with an assembly.  Many people are wearing red on this day, and we welcome you and your children to do so as well.” Pettitt also invites students to thank an extraordinary woman in their life.
The day’s events offers something for everyone, including pet lovers.  At 4pm folks will meet up at Pioneer Park for the Dogs Support Their Moms Dog Walk.  Anyone, anywhere, can participate on March 8th in one or all of the following ways:

2.Women, do not engage in paid and unpaid labor

3.Flex your purchase power and avoid spending money (with exceptions for small, women- and minority-owned businesses that support gender, racial, and economic equity/Day Without A Woman)

Wrapping up the day, Gather the Women will host their 15th annual International Women’s Day event at the Foothill Event Center at 6:30pm.  Marilyn Nyborg, Dr. Sharon Mijares and Elisa Parker are scheduled to speak with performances by Heather MacAdam and the Del Corazon Dance troupe.  More information at www.gatherthewomennc.org.
The day’s calendar is filling up as organically as IWNC has grown, from a grassroots movement of a handful of women in January to membership now standing at 2,300-strong, making it the largest Indivisible group in the country. Making up the ranks are women volunteering to engage more fully at local, state and national levels to transform our political process. We come from every walk of life and welcome all women to join us as we move into action together—indivisible.
More information is available at indivisiblewomen.org and womensmarch.com/womensday.
A Day Without a Woman Elisa Parker March Nevada City women 2017-03-07
elisa
Share