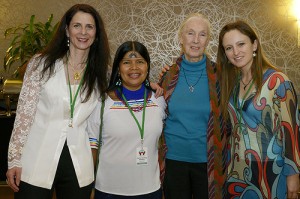 New York—A powerful cohort of women leaders from 35+ countries came together in New York later this month to take bold action on climate change and craft a Women’s Climate Action Agenda.  2012 Passion into Action presenter, Osprey Orielle Lake is the co-director of this extraordinary event.
The group included a compelling mix of business leaders, former heads of state, scientists, government officials, indigenous leaders, activists, teachers, community organizers and culture shapers, who completed the Women’s Climate Action Agenda at the first International Women’s Earth and Climate Summit, September 20th-23rd.
Participants included: Christiana Figueres, Executive Secretary to the UNFCCC; Marina Silva, former Brazilian Minister of Environment; Mary Robinson, former President of Ireland; Dr. Jane Goodall, Dame of the British Empire, Founder of the Jane Goodall Institute and United Nations Messenger of Peace; Nobel Peace Prize Laureate Jody Williams; Dr. Sylvia Earle, marine biologist; May Boeve, 350.org Executive Director; Dr. Vandana Shiva and leaders from Global Gender Climate Alliance, Women’s Environment and Development Organization (WEDO), 1 Million Women, the National Association for the Advancement of Colored People (NAACP), and other grassroots organizations.  (See a full list of Summit delegates here: http://www.iweci.org/summit-delegates )
“We are bringing women leaders together at this crucial time in history because we know that women are uniquely positioned to implement the critical sustainability solutions needed to address the world’s pressing climate challenges,” said Osprey Orielle Lake, co-founder of the International Women’s Earth and Climate Summit.  “Nature will not wait while politicians debate.  Women around the world are facing the impacts of a changing climate every day, and we are coming together to say “enough is enough” and it is time for action that addresses the roots of this crisis and fosters just solutions.”
Summit delegates gathered on the eve of Climate Week and the United Nations General Assembly session, and as the Intergovernmental Panel on Climate Change (IPCC) prepares to release its much anticipated Assessment Report.  The Women’s Climate Action Agenda will build momentum for substantive action on, increased funding for and the meaningful policy changes necessary to address the global climate crisis.
“Actions to date are simply not equivalent to the escalating urgency of the climate crisis. We are headed toward a 4 degrees C (7.2 degrees F) rise in global temperature over the next decades that will create unprecedented havoc for our children, grandchildren and future generations. Women are no longer willing to stand by when so much is at stake,” said Summit co-founder Sally Ranney. “We know what needs to be done, and mobilized women have the power to do it and to build a much stronger climate action movement. We are gathering in force in order to get climate solutions in place at the speed and scale necessary to make a significant difference,” Ranney added.
Additionally, dozens of communities hosted  ‘Vision Hub’ events to follow the proceedings via live stream (at www.iweci.org) and contributed questions and comments to the Summit delegates from locations around the globe.

About IWECI:  IWECI engages women grassroots activists, Indigenous and business leaders, policy makers and culture-shapers in collaboration. Our goal is to stop the escalation of climate change and environmental and community degradation, while accelerating the implementation of sustainability solutions through women’s empowerment, partnerships, hands-on trainings, advocacy campaigns, and political, economic, social and environmental action. www.iweci.org on Twitter @IWECI

Previous See Jane Do: Empowering Everyday Women to Be Heroes in Their Own Lives
Next See Jane Do Hosts Our First Slumber Party