So often fear paralyzes us from recognizing our true potential, our worth and our value.  We create stories in our head that we’re not good enough and would be ridiculed if we really put our whole self out there.  Amy Pence-Brown stripped down and was ready to take it.  She was surprised what was given back instead.

Radical Self-Acceptance: An Experiment/Performance by Amy Pence-Brown from Melanie Flitton Folwell on Vimeo. 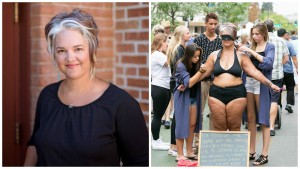 Amy Pence-Brown, A Stand for Self Love

“I woke up Saturday morning after a fitful night’s sleep and puked. And bloated with horrid cramps. And a raging period. (Hey, Donald Trump! MAD MENSTRUATING WOMAN ON A MEANINGFUL MISSION ALERT!). And I was terrified. I was scared that I might get asked to leave by the police or that people would yell terrible things at me or that no one would draw a heart on my body and I’d stand there alone and crying for minutes that felt like hours.

Well, none of that came true. Except for the crying part.

I let the farmers’ market director (who happens to be a friend of mine) know what we were staging about an hour before the event. Not only did I have her support, she suggested I stand in the middle of the busiest spot of the market, that she would handle any negative feedback or complaints, and could she borrow a marker to draw a heart on me now in case she missed the performance? It was probably with that first heart that I knew this was gonna be good. I had no idea just how good it was about to get.

Melanie set up her camera, Angie was my ear on the ground, and I hit my spot, barefoot, and stripped off my dress. The hush in the crowd around me was instantaneous and I barely had time to tie on my blindfold, prop up my sign and grab my markers before the first woman rushed up to me, touched my hand with her shaky one, told me I was brave and powerful and asked if she could give me a hug and started to cry. And then I cried, too. But I could tell she didn’t just draw a heart on my body. She wrote a word. In fact, by the end of my fifty minutes of continuous public support, there were dozens of words that covered my body, and even more hearts.

You’ll see all this in these photos and the video – that the hugs continued, as did the tears, a flower was placed by a young man at my feet, I got a kiss on the cheek and an ice cold lemonade left by my side for when I was done. And, undoubtedly, like me, you will also see other things in these photos – the sweat running down my rolls of back fat, cellulite (on strong legs that have carried me for four decades), a wonky bikini top with sagging breasts (that nourished three babies), stretch marks (that represent my transition from a chubby adolescent to a curvy teenager to a woman who’s been pregnant four times), and darkly tanned skin (from a summer spent at the Boise Public Pools with my friends and my children).

The most important things about this performance, though, are the ones you can’t see.

The personal stories of struggle.

The dad who stood in front of me with his two young sons and knelt down to tell them to “this is what a beautiful woman looks like.”