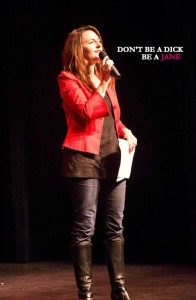 Elisa Parker, media maven, is a speaker, Storycatcher,reporter, strategist, coalition builder and visionary for gender parity and social justice.  She is the co-founder, president and talk radio host of the award-winning radio program and multimedia platform See Jane Do, co-founder of Indivisible Women, Co-Founder of 100 Women Change Hollywood: Partners in Parity and co-creator and co-director of 50 Women Can Change the World in Media & Entertainment. Elisa’s work takes her around the world to connect people through the power of stories and solutions that go beyond leaning in to broken systems.  For fourteen years she has hosted a weekly show featured on nationally-acclaimed radio station KVMR, where over 500 interviews have included such luminaries as Lily Tomlin, Gloria Steinem, Eve Ensler, Donna Karan, Geena Davis, Jennifer Newsom, Michael Franti, Kathy Griffin, Krishna Das, Indigo Girls, Terry Tempest Williams, Helen Reddy plus the untold stories of everyday women who are doing extraordinary things.  See Jane Do has also been featured on NPR in addition to other media outlets.

She is the co-founder and director of the Passion into Action™ Women’s Conference, TEDxGrassValley, WonderLove, Raising Jane and the See Jane Do Media Lounge. Elisa also facilitates, emcees and moderates programs, panels and workshops that aim to fill the gender gap in leadership. She has spoken at events such as, The United State of Women, UN Commission on the Status of Women, TEDx, Women’s March, March for Civility and Netroots Nation.  She reaches thousands through partnership with like-minded organizations and develops organizational-wide initiatives, communications strategies for events and digital media campaigns that support women’s leadership and gender equity. She currently serves on the KVMR Board of Directors, Advisory Committee to SheAngels and is a certified Higher Guidance Life Coach. Elisa is an alumna of the Women’s Media Center Progressive Women’s Voices program, Take the Lead Women and Vote Run Lead program. She holds a BA in Communications from San Francisco State and a MA in Organization Development & Leadership at the University of San Francisco. Elisa lives in the Sierra Foothills with her husband and two daughters.

Bring Elisa to your event, conference or festival:

See Jane Do Gender Parity Initiative and Consultation:  As a leader in women’s leadership and a champion for gender equity, our team co-creates and co-lead programs and initiatives such as, 50 Women Can Change the World in Media & Entertainment, 100 Women Change Hollywood and has led workshops and panel discussions at events including the United Nations Commission on the Status of Women, Indivisible Women, The National Women’s March and United State of Women.  Our team of experts customizes and develops programs to support gender equity in your organization and collaborates and partners with like-minded organizations to develop strategic action towards parity.

Podcast Producer & Host:  Elisa consults works with organizations and individuals to co-create and produce podcast that amplify your brand and connect with your customers through story.  Most recently she worked with Episerver for the Digital 99 series, featuring female leaders in Marketing and Technology.  Click here for more info.

In 2014 Elisa Parker, co-founder of See Jane Do said enough of the burn out and leaning into broken systems.  When she left her position in corporate America fifteen years ago to spend more time with her new born daughter she came face to face with the reality of her own value and worth.  She had given up the two things society values the most; power (position) and money.  Elisa recognized the need to empower everyday women, like herself and in 2009 created See Jane Do.  See Jane Do is a media and events company that encourages women to be heroes of their own lives and captures the stories of everyday women doing extraordinary things.

She embodied the Superwoman Syndrome.  Yet, as a mom running a household including her husband, two daughters, lots of pets and running a successful media & events company she realized that she was just tired of running.  She began to question what she was running too.  Just what was she leaning into; a glass ceiling, college debt, the good ole boys club, crazy healthcare expenses, doing it all, not doing enough, flabby arms, unequal pay?  She was tired of encouraging women to lean into a system that no longer serves them or men for that matter. Recognizing that change starts with ourselves, she retired her Superwoman cape, the hero who strives to save everyone first and instead became an everyday hero of her own life; saving herself, living for the present moment and discovering the wonder that already existed within her.  She went full Arete.

Arete:  Living in excellence through your purpose and passion.  Created by Sara Sharpe, the Arete Women’s Initiative is about being an everyday hero who embodies her fullest potential in health and wellness, spirituality, life plan, organization and relationship.  It’s the whole enchilada.  In each element Elisa asked herself two questions, “Am I making the most of my life and why not?”  She lost 20 pounds, strengthened muscles she never knew she had and participated in her first triathlon (riding her 10 year old daughter’s bicycle).  She launched a new media program, joined a year-round relationship program with her husband, learned to surf (ok she kind of learned to surf), got rid of the suitcase always sitting at the end of her bed, began to ask for what she wanted, cleared out what didn’t serve her (still working on that), negotiated debt, and has a loving relationship with her daughters (even when they tell her “you don’t understand”).  Basically, she made what seemed impossible possible and she’s much happier for it.

Sure she still experiences fear, has down days and cries when it hurts.  She’s also still flying her cape but this time she’s doing it on her terms.  She’s creating the new dream.  The re-definition of the new American Dream begins with each of us stepping into Arete and the wonder that already exists within you.  Do you wonder what’s possible, what you’re capable of?  You don’t have to look any farther than you heart.  Everything you’ve been looking for and need is already within you.

Elisa shares her message across the country and engages women and men to put their passion into action, to be part of the new American Dream and to just be their best self.

She’s recently co-launched 50 Women Can Change the World in Media & Entertainment with Take the Lead to create gender parity in the industry by 2025, coupled with a media series. Elisa connects with positive deviants across the country who have taken a left turn and are creating new models, programs and systems to create a positive shift that supports all people and the planet at large.

Elisa is a recipient of the Jody Fenimore Award for Public Affairs and Osborn-Woods Community Service Award.

“The Wild & Scenic Film Festival was lucky to once again have Elisa Parker running the show at our Media Lounge.  From concept to execution, her vision became reality and our filmmakers and special guests were treated like the VIPs they are.  Her interview style was professional and fun—the prep work she completed in advance of interviews was glaringly obvious in her insightful questions and impressed not only the audience, but the guests themselves. With Elisa, you have complete confidence the job will  not only happen, but that the product will exceed expectations.”  ~Melinda Booth, Wild & Scenic Film Festival Director

“I can’t thank you enough for all that you do. You create an environment where anything seems possible. You bring an incredible gift to this community.  You are a rock star!”~Heather Donahue, director, actress and author of Growgirl

“Thank you for the best interview I have ever had. That’s saying a lot considering I have been interviewed by everyone from Bill Maher to  Geraldo to Governor Kasich. But somehow they all failed to employ anything approaching your holistic and heart centered approach. You managed to evoke each aspect of my personal journey, my passion, my purpose and my professional life in a way which flowed naturally and weaved each topic to the next. I found the experience utterly delightful and supremely inspiring.”~Veronica Monet, author, relationship specialist, sexologist

“On behalf of us involved with the film project, I really want to thank you for taking the time, professionalism and just all around great hosting skills to make for a very fun interview. We’ve done a number of these, at least I have, in the last six months or so and that was really head and shoulders the above anything previous. Not that the others weren’t great, but you are very very good at what you do. I know you definitely put everybody ease in front of the camera (including rhythm). So, again, thank you so much. It was the great way to participate further in the festival.”~Tony Schmiesing, adventure seeker, writer & filmmaker

“Elisa Parker is an incredible asset to the community. She is a thinker and a doer. As a moderator, master of ceremonies and broadcaster at KVMR, her ability to ask pertinent questions, draw out personalities, create interest by engaging and captivating her listening audience is nothing short of pure genius. Her mission to encourage, educate and empower women via See Jane Do is an integral piece, not only for Nevada County but really for society as a whole. As Executive Director for Nevada County Composers Cooperative and Education Coordinator for Music in the Mountains I have had both the privilege and pleasure of working with Elisa on the radio and at events she has emceed. She is a bright star in our community.” ~Mark Vance, Executive Director Nevada County Composers Cooperative & Education Coordinator Music in the Mountains

“I’m more than happy to know that there was a kid named Elisa who regaled her younger siblings with Edith Ann stories.  That’s as much as anything can be.” ~Lily Tomlin